The Servants, Inc. was founded in 1973 by Larry Besaw. Originally the corporation was focused in two commercial ventures: a corrugated packaging company and a commercial cleaning service, hence the name "Servants".

Following high school Larry Besaw moved to California to go to college. During his college years he also worked for a corrugated box company and an office cleaning business. He soon went to work fulltime in the box plant and in 1971 an earthquake destroyed that plant. He went home to Evansville, Indiana to follow his dream.

He went to work for Inland Container in Evansville, Indiana and began to put that dream of owning a corrugated packaging plant into action. He lacked the capital to buy the equipment necessary so he convinced Inland Container to allow him to clean their offices at night. That gave him enough capital to incorporate and on Jan 3, 1973, The Servants Inc. became a reality. He rented a building and soon was running fabricated products for Inland.

His cleaning service and the fabricating business grew to the point that he had the capital to purchase some much-needed equipment and within a year he was manufacturing cartons and other packaging products.

In the early 90's The Servants, Inc. expanded its line to offer a more diversified packaging line, including polystyrene and polyethylene. In order to accommodate this growth into fabrication, an additional plant site was added in the Jasper area including a maintenance shop and research and development center.

Larry Besaw passed away in 1997 and his family now owns and operates the business. 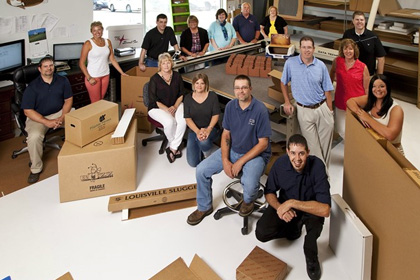 The Servants, Inc. design department has received national recognition from the Association of Independent Corrugated Converters (AICC). The Servants, Inc. placed 2nd in the Innovative Use of Corrugatedcategory and in 1995 placed 1st in the Industrial Packagingcategory.

In Aug of 2001, The Servants Inc. moved into a beautiful, spacious new manufacturing facility in Jasper, Indiana. In 2002 the operations were consolidated. Currently we have a production plant and corporate office in Jasper, Indiana and a warehouse and sales office in Evansville, Indiana.

The Servants Inc. is still thriving in part because of Larry’s dedication to the customer. His motto “dedicated to serve” still guides the business.